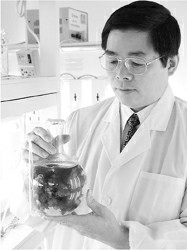 Yan Xinghong is in the lab.

The high-tech achievements may not be unattainable. For ordinary people, it may be the distance of a pair of chopsticks. For example, try a new variety of seaweed. Because it was selected as the first seaweed variety with independent intellectual property rights in China, â€œShanfu No. 1â€, which was hosted by Shanghai scientists, it also won the cityâ€™s first prize for scientific and technological progress.

Deterioration of quality threatens the cultivation of seaweed may be the most convenient plant to eat, but its breeding is not at all simple. It does not have seeds that are visible to the naked eye and it is a far cry from common land crops. After World War II, people gradually learned the life history of seaweed, and large-scale artificial cultivation only followed.

Professor Yan Xinghong, head of the research team at Shanghai Haiyang University and the person in charge of the selection and promotion of alpine porphyritoids, told the reporter that China's main cultivation of two kinds of seaweed is: First, Porphyra yezoensis, thin algae, and good taste, often made into paper-based cakes, Used to make sushi; Second, alpine porphyra, because algae thicker, commonly used to make soup. The algal porphyra is large and grows quickly. The yield per mu is much higher than that of the porphyra purpurea. In the total output of seaweed in China, the algae accounted for more than 75%. Therefore, Chinese scientists have researched the alpine seaweed with regional advantages and have more industrial value.

In China, the cultivated variety of alpine porphyra has always been derived from wild species. Due to the excessively high planting density, arbitrarily preserved seeds and inbreeding, resulting in serious degradation of germplasm, generally grown to 20-30 cm, matured for decades. Before, one meter long is not uncommon.

In order to ensure the sustainable development of the industry, in 2002, the alpine porphyra cultivar cultivation technology was listed as a major project of the â€œ863â€ plan by the country. Yan Xinghong, who returned to China after receiving a doctoral degree in Japan, was the subject of the project. Although Laver is the same as Porphyra yezoensis, it differs greatly in the way of life and reproduction, and it is not possible to simply refer to the breeding techniques of foreign varieties of Porphyra yezoensis. This is both a disadvantage and an advantage, because once it is successful, it is the world's first. Facts have proved this. Yan Xinghong's research team finally achieved a series of breakthrough results in the international advanced level.

The breakthrough results in the creation of the new seaweed algae seems to be weak, but under the interpretation of Yan Xinghong, it is like a fighter with nature. Each of its leaves (scientific name is called "foliage") is composed of only one layer of cells, and it can withstand storms and the hot sun. On the one hand, the leaves are protected by a layer of tough agar "soft armor." On the other hand, it is a unique reproduction model: In simple terms, most of the species' somatic cells contain a set of identical genomes, but Lavera can produce 4 genes from a seed (shell spores) through sexual reproduction. Different types of cells grow into a single leaf consisting of four different genotypes. In this mode, the gene bank of alpine porphyra can quickly be enriched to face the harsh screening of nature. It is precisely because Yan Xinghong's task group elucidated the position of meiosis of Porphyra haitanensis at the level of cytology and molecular biology, improved the understanding of its life history, and revealed the genetic characteristics of Porphyra haitanensis for artificial breeding for the first time in the world. Laid the theoretical foundation.

At the same time, the research group also discovered for the first time that both the male and the female of Laveria natans can carry out parthenogenetic reproduction under certain conditions. The use of parthenogenetic techniques ensures that the fine traits of alpine porphyra can be stably inherited from generation to generation.

Based on the above basic research results, Yan Xinghong's research team has established a rapid and highly efficient technology system for selection and breeding of alpine porphyra. Through the integration and innovation of modern biological technologies such as somatic cell cloning, artificial mutagenesis and parthenogenesis of seaweed, more than 30 strains have been screened out. Excellent strains: Some of them have fast growth and long growth periods. Some algae are thin and of good quality. Some can withstand high water temperatures, and some can grow in low-salt water... In 2010, they were certified by the Ministry of Agriculture as new varieties. The "Shenfu No. 1" promoted nationwide is only one of the outstanding representatives, and its per mu yield has increased by more than 30% compared with traditional cultivars. So far, there have been tens of thousands of farmers who have benefited from the cultivation and processing of â€œShenfu No. 1â€, and the output value reached several hundred million yuan.

The study found that the protein content of seaweed is close to 40%, containing various vitamins and trace minerals required by the human body, both nutrient and health dual functions, but the nutrients in the cells are wrapped in thick cell walls and agar. . The body does not digest the enzymes of agar and other algins, so most of the nori is not absorbed. Even if boiled or boiled with boiling water, it can not destroy the "soft" and cell wall of seaweed. The correct method is to conduct cell wall-breaking treatment by baking first, until the seaweed color changes from black to green, nutrition can be dissolved in water and absorbed by the body.

"Japan's per capita consumption of seaweed is extremely large, reaching several times that of China, which is one of the reasons why Japan's per capita life expectancy is the world leader." Professor Yan Xinghong said that at present, he not only has to research and promote high-yield varieties of alpine porphyra, but also Efforts to cultivate seaweed with higher nutritional value, better taste and easier digestion and absorption. On this basis, if we can change the processing and consumption of seaweed in China, this ancient algae can better benefit people. Our reporter Zhang Hao